Both bleedthrough and crosstalk are present in this image. Bleedthrough is manifested by the relatively high extracellular gray level in the image (compare with Image 2 where bleedthrough has been eliminated).

Bleedthrough has been eliminated by changing the excitation filter to one with a transmission band that does not intersect with those of the quad emitter. The cause of bleedthrough is transmission of excitation light through the emitter to the camera. Crosstalk, manifested by detection of perinuclear mitochondrial fluorescence, is still present in this image (compare with Image 3 where crosstalk has been eliminated to produce an actin-specific image).

Fundamentally, crosstalk is due to excitation and emission spectra of fluorophores such as FITC and Cy3 not being confined to discrete wavelength ranges. Even though Cy3 fluorescence is optimally excited by green (~550 nm) light, it is also excited by cyan (475 nm) light to a sufficient extent to be readily detectable in Image 2. The crosstalk signal is eliminated by changing the quad band polychroic and emitter for a single band dichroic and emitter to achieve increased blocking on the emission side of the detection system. This solution is a compromise, as it produces an increase in resolution at the expense of speed. 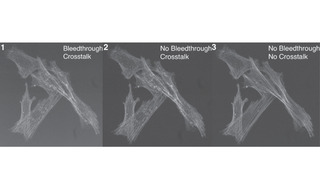 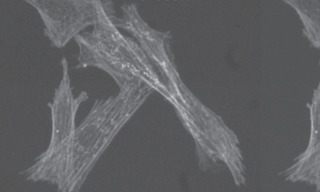