What can Lumencor Light Engines do for you?

One answer to this question can be found by taking a look at recent publications by researchers who are already using Lumencor Light Engines. With the ever-increasing pace and scale of life science research, you don’t want to be held back dealing with inconsistencies in your data caused by an obsolete and unreliable light source on your microscope. As demonstrated in the following summaries, solid state illumination with Lumencor Light Engines combine long-term reliability and stability with the intense and polychromatic light output required for the most demanding bioimaging applications.

Channelrhodopsins (ChR) are light-gated ion channels used for genetically targeted optical activation of neurons (optogenetics). In some cases, their conductance of calcium ions and protons (in addition to sodium and potassium ions) may cause undesired side effects such as glial acidification. Researchers in Edward Boyden’s lab at Massachusetts Institute of Technology developed an automated screening method for identifying ChR2 variants with optimum combinations of high light-driven cell depolarization, low calcium photocurrent, and low proton photocurrent. To generate repetitive ChR2- mediated action potentials in cultured neurons, TTL triggering of a SPECTRA X Light Engine was used to deliver sequences of 2 ms photostimulation pulses at 470 nm (4.9 mW/mm2). Screening of mutations throughout ChR2 (positions 2–299) identified a quadruple mutant (ChromeQ) with order-of-magnitude reductions in calcium and proton conductance and increased fidelity in driving repetitive action potentials compared to ChR2.

The up-regulation of microRNA-21 (miR-21) in stromal fibroblastic cells in colorectal cancer and other solid tumors has been well documented since its linkage to human cancer in 2005. However, the expression of miR-21 in tumor budding cells (TBCs), locally invasive carcinoma cells with increased metastatic properties, has not been well characterized. Knudsen and colleagues at the Danish Colorectal Cancer Center analyzed miR-21 expression in TBCs with a Pannoramic confocal scanner (3DHISTECH, Budapest, Hungary) equipped with a SPECTRA X Light Engine. Compared to conventional epifluorescence microscopy, confocal slide scanning microscopy reduces the detection of background autofluorescence resulting from the processing of FFPE tissue sections, and provides a more detailed three-dimensional view of tissue invasion by TBCs.

The vast majority of neuronal actin, along with other cytoskeletal proteins, including tubulin and neurofilaments, are made in the neuronal soma and conveyed into axons via slow axonal transport. Chakrabarty and co-workers have used a combination of live imaging, STORM superresolution microscopy, and modeling to gain a better understanding of the underlying transport mechanisms. GFP:Utr-CH (GFP fused to the calponin homology domain of utrophin) was used to visualize axonal actin dynamics in conjunction with a SPECTRA X Light Engine at 20% cyan channel output intensity at a rate of one 400 ms exposure frame per second for a total duration of 10 minutes. Accurate determination of actin colocalization with the barbed end–binding proteins Mena and Vasp in a dynamically evolving system required near-simultaneous two-color imaging of axons co-transfected with GFP:Utr-CH and mCherry:Mena or mCherry:Vasp, performed via microsecond switching of the SPECTRA X cyan and yellow channels and a dual-band dichroic and emission filter providing
subpixel color registration.

Correlative light and electron microscopy (CLEM) allows identification of fluorescently-labeled biomolecules within the cellular ultrastructure and/or ultrastructural analysis following live-cell imaging. Accurate registration of fluorescence microscopy (FM) and electron microscopy (EM) images is critical, but can be difficult to achieve due to the widely different contrast mechanisms and magnification of the two modalities. Researchers from Delft University of Technology in the Netherlands have demonstrated an automated method for high-precision (< 5 nm) FM and EM image overlay. The method relies on excitation of fluorescent labels on a conductive indium tin oxide (ITO) coated glass slide by the focused electron beam (cathodoluminescence) to transpose the EM coordinate frame on the FM camera. A SPECTRA X Light Engine was used for fluorescence excitation of paxilin-GFP and Alexa Fluor 594 immunolabeled insulin in CLEM images acquired for method validation. 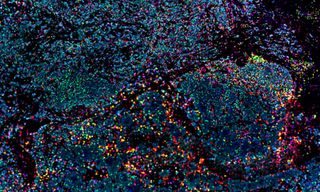