Applications of Lumencor light engines extend far beyond the life sciences. In the materials science arena, applications such as semiconductor wafer inspection and photolithography benefit from their brilliance, spectral content and temporal control of light output. A glance at some recent research publications gives a perspective of the diversity of these applications.

When two or more water droplets coalesce on a superhydrophobic surface, the resulting droplet can jump away from the surface due to inertial−capillary energy conversion. The resulting passive shedding of microscale water droplets has the potential to enhance heat transfer, anti-icing, and self-cleaning properties. To study this process, researchers at the University of Illinois developed an improved imaging technique called focal plane shift imaging (FPSI) to measure three-dimensional (3D) droplet trajectories. A high-speed camera is used to obtain video recordings at variable frame rates up to 500,000 frames per second. Illumination is supplied by a SOLA SM Light Engine, specifically chosen for its high-intensity, low-power consumption and narrow spectral range (380−680 nm) in order to minimize heat generation at the surface due to light absorption. The effects of initial droplet size mismatch and multiple droplet coalescence on the jumping droplet velocity are revealed, showing that multidroplet jumping has the potential to enhance the droplet departure speed.

Metal additive manufacturing is the process of joining materials to make objects from 3D computer-aided design (CAD) model data. Laser powder bed fusion (PBF) is one such process, in which thermal energy derived from a laser beam selectively fuses regions of a powder bed. A team from Heriot-Watt University, Edinburgh, and the University of Birmingham in the UK used high-speed imaging to investigate the interaction of the laser beam with the powder bed at sub-atmospheric pressures. They used a SOLA SM Light Engine to illuminate a circle of ~10 mm diameter on a stainless steel powder bed inside a vacuum chamber. Image sequences were recorded at 40,000 frames per second by a monochrome camera. The data obtained indicate that operating in a soft vacuum (>50 mbar) would provide the simplest implementation of PBF at sub-atmospheric pressures. The reduction in vaporization temperature at reduced pressure means that the same penetration depth can be achieved at lower laser powers, resulting in a stabilizing effect on the process.

Design and Characterization of Plasmonic Cavities

Plasmons are surface-bound electromagnetic waves that propagate along metal interfaces. Confinement of plasmons in a cavity between two reflectors with and intervening gain medium results in a spaser —the plasmonic analog of a laser. Although colloidal quantum dots are in many respects an ideal gain medium, they have previously proved to be difficult to integrate with other elements of the plasmonic resonator. To address these issues, researchers from the Optical Materials Engineering Laboratory at ETH, Zurich have applied a strategy, in which the plasmonic cavity and the gain medium are separately engineered. A SOLA SE Light Engine was used for optical pumping of spaser prototypes. They succeeded in fabricating spasers capable of generating very narrow line-width plasmons suitable for refractive index sensing applications.

Hydrogen production via electrolytic water splitting is a promising approach for storing solar energy. However its relatively low efficiency remains an obstacle for industrial scale applications. Part of the inefficiency results from hydrogen and oxygen gas bubbles evolving at, and sticking to electrode surfaces, thus hindering the formation of new gas bubbles. Baczyzmalski and co-workers used 2D shadowgraphy, an optical method that reveals non- uniformities in transparent media, to characterize electrolyte flow and hydrogen bubble geometry under the influence of a magnetic field. Illumination was provided by the green channel output of a SPECTRA X Light Engine. The results indicated that the pressure change around the bubble induced by electrolyte flow is very small and has only a weak stabilizing effect on bubble detachment, contrary to the findings of previous investigations. 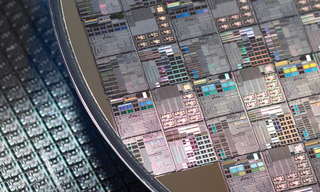