Among the trends redefining the life sciences in the 21st century are (1) the rapidly expanding use of genomics for diagnostics and (2) the design of low-cost, portable analyzers. Life science instruments propel these trends using light as a powerful, analytical tool. Although high intensity, low cost light sources are es- sential to the design and proliferation of new bioanalytical instruments, until now this key subsystem has lim- ited instrument performance and hindered substantial system cost reduction. As large instruments are re- engineered into miniaturized analyzers and ultimately point-of-care devices, the availability of low cost, high performance, miniaturized Light Engines remains an elusive goal. Lumencor offers an inexpensive lighting so- lution that no competitive technology provides for today.

Lumencor is uniquely positioned to provide new Light Engines to satisfy this growing market. Lumencor Light Engines (patents pending) utilize solid state luminescent materials, excitation source and optimized light management techniques. A variety of light source technologies is employed to optimize the output of each color. Commercially available components are utilized to solve long standing technical problems and are con- tributing to the growth of an established instrument market. Initial single color products are configured to di- rectly replace existing light subsystems and sell for less than $3000. A working prototype has been tested and validated by a third party. Comparable prototypes are being shown to prospective customers. These are miniature, high power, cyan Light Engines designed as alternatives to the biotech workhorse, the Argon ion laser.

Today’s commercial light sources include lamps, lasers and LEDs. Arc and tungsten lamps offer white light for a broad range of uses. Lasers are the brightest and most spectrally pure light sources. While LEDs offer by far the lowest cost light source option. A more detailed examination of the competitive technical and business landscape follows.

The primary light sources for PCR and Sanger sequencing instruments are tungsten halogen lamps, arc lamps and lasers. The tungsten halogen lamp is a mature product having been repeatedly optimized for dis- play and lighting applications. Thus, improvements in its low light-collection efficiency or mitigation of high thermal emissions are unlikely. Durability and stability issues are also inherent and difficult to resolve. Its cost could come down but only if driven by volume applications. This white light source with a width of over 1000 nm must be heavily filtered to create the 10 nm band required in bioanalytical instruments. Figure 1 provides the typical emission curves as a function of drive current or operating temperature. As such, the light output to the sample volume is quite low, on the order of mWs, which relegates use of this lamp to low throughput instruments. 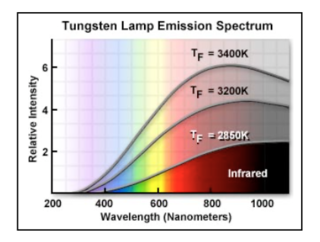 To overcome this limitation, instrument designs employ arc lamps. These high power lamps generate large light levels, however, they also generate very broad white light that must be heavily filtered. Additionally, they create significant heat loads which must be carefully managed to avoid compromising the bioanalytical chemistry and instrument performance. Power instability due to the changing arc over its lifetime is a notori- ous problem. The arc lamp has been significantly improved due to its proliferation in newer microdisplay based projection televisions and business projectors. However, the availability of low cost LEDs have diffused efforts to improve the arc lamp. Typically arc lamps, with their associated filters and spectral wheels, mirrors, controllers and shutters can require the addition of $10,000 to the cost of a $3,000 to $5,000 bulb.

A common alternative to broadband lamps is the laser. One of the most frequently employed in bioana- lyses is an air cooled Argon ion laser. A typical laser, for capillary based sequencing for example, provides 10 to 25 mW in a collimated, multi-line beam. However, the laser color-balance is inherently unstable; the power output of individual wavelengths varies over time and from product to product. Furthermore, lasers are lim- ited in the number of wavelengths available. They are nonlinear devices and as such are built to be run in a continuous mode. They are not readily modulated except by external mechanics. The failure mechanism of lasers is a catastrophic event and as a consequence require replacement every 6 to 8 months. Replacement costs average $5,000 and, because they are typically replaced twice in the course of a year, result in high annual maintenance costs. Serious safety concerns exist about the use of these light sources by inexperi- enced users and in non-traditional testing environments.

As a consequence of the above shortcomings competition from improved light sources will likely come from diode lasers and LEDs. Significant improvements in these semiconductor products have already re- sulted in enhanced brightness, wavelength range and cost reductions. However, diode lasers are primarily targeted for telecommunications. They do not readily provide wavelengths in the visible and UV ranges of the spectrum, those required for bioanalyses. Techniques typically employed to generate these wavelengths, including frequency doubling, are unlikely to generate sufficient light for low cost Light Engines. Difficulties with beam shape, power stability and reliability are other issues yet to be resolved.

One exception receiving significant attention in newer instrument applications are the up-converted IR diode lasers, the so called DPSSs (diode pumped solid state lasers). Users will find them less expensive, more powerful and longer lived than their predecessors, however they retain certain limitations: namely, a limited number of emission lines, the need for external modulation and they remain prohibitively expensive for many applications.

LEDs are now available in a relatively wide range of wavelengths. However their output is significantly broad so as to require filtering. Additionally, output in the visible spectrum is profoundly reduced in the green. This gap in usable wavelength range compromises their utility for bioanalyses which require multicolor excita- tion throughout the visible. Because sufficient light intensity cannot be obtained from individual units, arrays of LEDs are employed, leading to uniformity, stability and durability issues. The spatially broad output leads to lower collection efficiencies and contrast ratios. Their main advantage, low unit cost, is often offset by the cost and complexity resulting from the needed additional components for their implementation.

Most importantly, these light technologies cannot be readily improved for bioanalytical applications. The associated Light Engine market simply does not justify the large investment necessary to overcome funda- mental performance limitations. As a result, analytical instrument performance and price is con- strained by the light source with no clear solution in sight. Moreover the numerous manufacturers of lamps and lasers provide only a source, not an integrated Light Engine. Such companies include ILC Technol- ogy, Lumileds, Spectra-Physics and Sylvania. Lumencor is in a unique position to provide a highly integrated, cost effective subsystem that bests our direct competitors.

Lumencor’s Light Engine outperforms competing technologies in all figures of merit, including cost. Table 1 provides a general comparison of competing Light Engines. As an example, a Lumencor Light Engine can emit narrowband light exceeding 500 mW with intensities above 100 W/cm2. Bandwidths are as narrow as 10 nm. Lumencor Light Engines also have unique temporal and spatial properties that should enable new in- strument designs and capabilities. 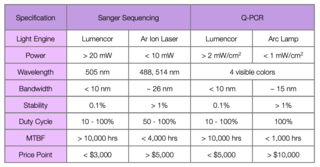 Each light engine consists of a lamp and delivery optics. The lamp subsystem embodies multiple mod- ules optimized to each produce a precise set of wavelengths. One such module is shown in Figure 2. Here Lumencor’s light pipe technology is the source. Light is generated by a luminescent light pipe which is driven by an e-beam, LEDs or UV lamps. The pipe, which may consist of any of a variety of luminescent materials (e.g. rare earth doped glass, organic doped plastic, single crystal fiber) is tailored to emit light in the UV through the NIR. In the case of the rare earths, emission is inherently narrow due to their atomic-like energy structure. Any unwanted light is removed by a simple bandpass filter. The light output from the pipe is fed into an optical delivery pipe and into the instrument. The fast luminescence decay results in rapid switching with no appreciable warm up time.

Figure 2: Schematic of a typical light engine consisting of a lamp module and delivery optics.

The light pipe geometry integrates a significant fraction of the light leading to high external efficiencies. These efficiencies are optimized by the innovative design of the lamp module including the excitation source and the unique geometric shape of the pipe. Increased power levels, exceeding those typical for lasers in these applications, can readily be obtained by scaling the light pipe and associated excitation.

Each of the colors produced by Lumencor light engines requires a unique combination of light pipe and excitation source. Each instrument application requires one of several different approaches to coupling light from the delivery pipe into sample volumes. As an example, the light in a Sanger sequencer is coupled to a row of capillaries, each with a bore diameter of 50 μm. A Q-PCR tool requires uniform excitation in an array of wells within a microtiter plate with no illumination of the interstitial spaces. To satisfy the range of instru- ment architectures, imaging and non-imaging optics are part of the Lumencor design portfolio.

Lumencor’s product families are based on a common set of single color wavelengths and a set of light delivery systems. The colors and instrument geometries have been defined by commercial instrument users and instrument manufacturers. Six wavelengths have been identified based on the most common fluorescent dyes used today as well as the common sets of dyes most often employed in sets of two, three or four. These dyes and dye sets are used in microscopy, whole cell analysis, DNA sequencing, PCR, as well as across numerous other instrument applications throughout the life sciences. 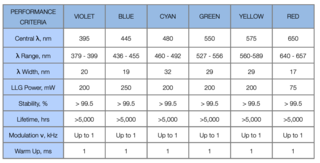 Many light delivery systems share common geometries. As such three optical systems have been iden- tified upon which to base light engine product families. They are direct illumination; light piping using an opti- cal fiber or liquid light guide; and flood illumination. Direct illumination is an option for microscopes; piping is important for microscopy, sequencing, sensors, endoscopy; and flood illumination should be implemented for microarrays, microtiter plates, bioanalytical chips and any systems in which a larger areas must be irradi- ated.

Lumencor’s first product family is a set of light engines for fluorescence microscopy. The important wavelengths upon which the light engine products are based are listed in Table 3. These colors are the basis for the development of all subsequent Lumencor product families. In microscopy applications, there is signifi- cant demand for single, dual, triple and four color light engines. A list of specifications is outlined in table 3.

Lumencor has core patent applications that cover light engines for use in the broad arena of life sci- ences. Specifically, the company has filed US and PCT applications covering all life science instruments based on Lumencor light engine technology. This strategy is key in that it secures Lumencor’s position in the life sciences preventing competitors from building similar light engines for use in this sector. As well, Lumencor has several disclosures for proprietary materials that satisfy a subset of unique technical requirements; these clearly separate Lumencor from the extensive prior art on luminescent glass, plastic and/or crystalline fiber. 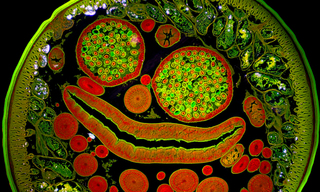