A uniquely outstanding characteristic of Lumencor’s solid-state Light Engines is their long operational lifetime, extending over many years under typical usage conditions. Estimates of the operational lifetime (light output) ranging from 10,000 – 20,000 hours or more is frequently cited in research and commercial publications. However, these estimates are often derived from performance data for single light emitting diodes (LEDs) and are not necessarily representative of the highly integrated light sources utilized in sophisticated Light Engines like Lumencor’s in typical working environments. This white paper provides operating lifetime projections for Lumencor’s Light Engines based on an analysis of service histories, cost considerations of solid-state Light Engines v. arc lamps, and a presentation of optical output stability data.

Lumencor defines the service lifetime of a Light Engine as the time for light output power to decrease to 70% the value recorded on the original certificate of conformance. Such certificates are shipped with each new illuminator to ensure the product’s performance based on the manufacturer’s published specifications. The corresponding number of days/months/years may vary considerably, depending on the duty cycle implemented by the user and the prevailing environmental conditions during operation. It is expected that non-routine repairs may occasionally be needed in the course of the service lifetime.

To provide an estimate of service lifetime under real operating conditions, service records of 16 SOLA SM Light Engines were analyzed. The SOLA SM Light Engines model was selected for this analysis for two reasons: (i) there exists a large installed base, many thousands of units as of March, 2020; and (ii) the SOLA SM Light Engine has the highest operational duty cycle of any Lumencor product. While most electronically operable, Light Engines are most commonly utilized at quite low duty cycles, less than 10%, (the vast majority of the time in use their light sources are off), by contrast, this Light Engine is designed to most closely mimic an arc lamp. On-time for this model can be continuous, 100% for most of it’s operational life, and for substantial hours of uninterrupted use its array of light sources are all on.

Service records of 16 SOLA SM Light Engines between three and six years old were analyzed. The output power measured on the service intake date was compared to that recorded at the date of manufacture (reported on the original certificate of conformance). The percentage of original power output at the various service milestones represented among the 16 SOLA SM Light Engines ranged from 86% to 98% (Figure 1). From this data, the average decrease in power output per year of service lifetime is calculated to be 2.0%/year, with a standard deviation of 1.1% per year. Projecting a linear 2% per year decrease, the end-of-life threshold of 70% original output power [1] is reached after 15 years, (Figure 2). Taking the standard deviations into account, the minimum projected lifetime is nine years. 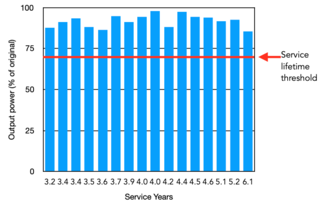 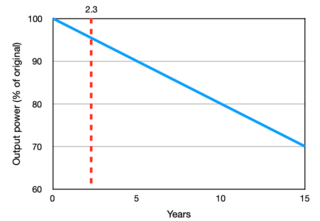 Figure 2. Projection of a linear 2% per year output power decrease, reaching the operational lifetime threshold of 70% after 15 years.

The cost of ownership analysis of any Light Engine should include not only the initial purchase price but also costs of replacement components, labor costs incurred in their installation and costs of utilities required for operation. Unlike mercury arc lamps, solid state lamp replacements such as the SOLA SM Light Engine do not require replacement bulbs; the resulting savings in operating costs are substantial (Table 1). The vertical line at 2.3 years in Figure 2 represents the time required to recoup the capital cost of a SOLA SM Light Engine from saved mercury bulb consumable costs according to the calculations shown in Table1. 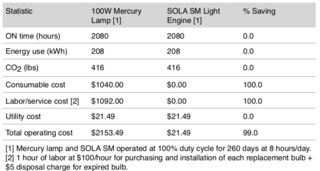 Color-selective Light Engines (as opposed to the SOLA Light Engine which produces white light from multiple sources operating simultaneously) are equipped with onboard microprocessors (AURA, CELESTA, SPECTRA and ZIVALight Engine models) which provide continuous readouts of total system operating time and light output duration. This data is displayed in the resident control GUI (Figure 3) and can be exposed in any control software application by implementing commands available in the Light Engine API. Given their utility is often employed for single sources operating in series, as opposed to the white light, SOLA Light Engine, in which numerous sources all operate in parallel, color-selective Light Engine can be expected to live at least as long as the 15-year white Light Engine projection.

Short-term output stability is also far superior to that of mercury and metal halide arc lamps (Figure 5). The root mean square (RMS) noise is <1% and is five times lower than that exhibited by a 120 W metal halide lamp. In the specific case of the SOLA SM Light Engine, this noise level represents the combined output variance of numerous solid-state light sources operating simultaneously. Even lower noise levels (<0.5% RMS) are readily attainable for single solid state sources in Light Engine models with color-selective outputs. 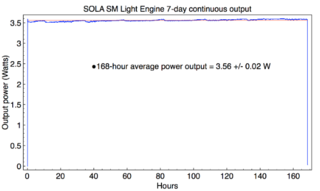 Short-term output stability of a SOLA SM Light Engine compared to that of 120 W metal halide lamp. Light from 3 mm liquid light guides attached to the light output ports was directed to an analog photodiode.

With projected service lifetimes of 15 years, longer than this company’s history, solid-stateLight Engine users are ensured of stable, robust performance over many years of maintenance-free operation. Value exists in the operational lifetime as well as the elimination of replacement parts and their associated costs. Demonstrable outcomes of better data, long lifetime and lower cost are routinely realized with technical lighting designed to foster stable performance. The utilization of mercury-containing illumination in the form of arc lamps, be they metal halide or mercury lamps, should be eliminated in pursuit of better data quality, better economy and efficiency. 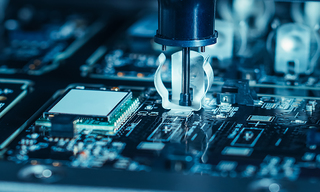