Many applications in life sciences and beyond benefit from the integration of spectral, temporal and spatial control of light output provided by Lumencor Light Engines. A glance at some recent research publications provides insight into the diversity of these applications.

Optogenetics: Not Just For Neurons
Although optogenetic stimulation and inhibition are most often used to modulate neuronal function, there are emerging applications in other areas of biomedical research as well. Here are three examples.

3. Calcium Signaling
Researchers at the University of Pennsylvania describe optogenetic control of calcium oscillations in HeLa cells via expression of the photosensitive G protein- coupled receptor melanopsin. They used a SPECTRA X Light Engine for photostimulation of melanopsin at 470 nm and also for excitation of the intracellular Ca2+ indicator X-rhod-1 at 570 nm.

6. Solar Energy
Artificial photosynthesis is the process of converting sunlight into fuels by photochemical splitting of water into oxygen and hydrogen or reduction of CO2 to carbon-based fuels. In pursuit of this objective, dye-sensitized photoelectrosynthesis cells (DSPEC), in which a wide band-gap, nanoparticle oxide film, typically TiO2, is derivatized with surface-bound molecular assemblies for light absorption and catalysis are currently under active development. Researchers from the University of North Carolina at Chapel Hill recently described a second-generation DSPEC that achieves greatly enhanced visible-light–driven water splitting efficiencies. Performance evaluation was carried out using 445 nm light output from a SPECTRA Light Engine. 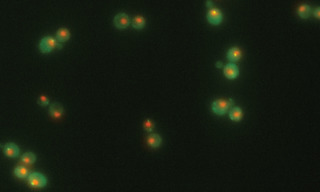